The overcast and unsettled weather from the end of April continued into the beginning of May, severely curtailing PIBO’s mist netting efforts. The wind, meanwhile, seemed to come from every direction but south, creating challenging conditions for the migratory songbirds. The arrival of warbler species such as the Magnolia and Chestnut-Sided Warbler seemed to be delayed compared to previous years, and other species appeared to linger on the island for longer than they would normally. For example, we had thought that the Golden-Crowned Kinglets had all moved north to their breeding grounds, but one was banded on May 6th and others were sighted periodically up until May 8th.

With the low numbers of warbler species being seen during our official count period, we were worried that the birders visiting Pelee Island for the Spring Song weekend would be disappointed: but, during the preceding week, the skies cleared, the mornings grew warmer, and birds appeared in abundance! Despite a late start, 72 birds were banded on May 11th, our busiest banding day to date. 73 species were observed as part of PIBO’s migration monitoring, compared to 65 the day before – an auspicious increase that made Sumiko Onishi, PIBO’s Field Supervisor, decide to begin her Birdathon that morning. She ended her 24-hour birding marathon at 7:20 a.m. on May 12th – just in time for her to go on the daily census! – and saw a total of 98 species.

Spring Song’s annual Bird Race began at 12 p.m. on May 12th. Eight teams participated this year, and together they saw 149 species before the race ended at 12 p.m. on May 13th. The winning team, with 115 species, belonged to J & K Rolling. Highlights included a Summer Tanager and Grasshopper Sparrow that were seen by several teams, and a Kentucky Warbler and Harris’s Sparrow reported by Eric and Mike Oroz.

While the trail leading to PIBO’s banding station at Fish Point is still very wet and muddy (boots are a must if you are thinking of visiting), it is now much more passable thanks to Jim Wigle of the Ministry of Natural Resources and his staff, who have removed many of the trees that had fallen across the footpath. PIBO would like to extend its sincerest thanks to them for their hard work – it has made our daily walk to work much easier!

Also in station news: we are pleased to announce that the PIBO exhibit in the Pelee Island Heritage Center is complete! The information panels, which were the final item needed, were printed by Speedprint in Leamington and installed by Richard Galloway in time for the exhibit to be open for Spring Song weekend.

The following are photos and descriptions of some of the rare and unusual species seen by PIBO staff and others over the past two weeks: 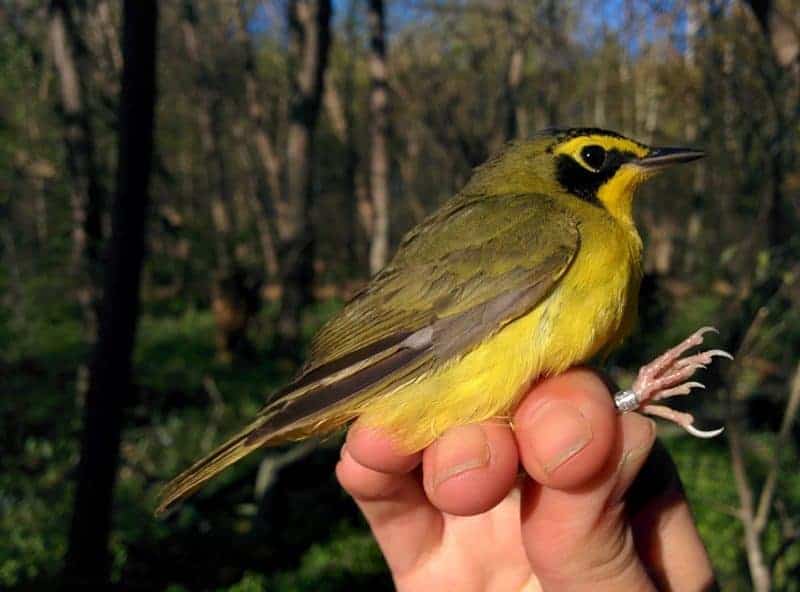 Like the Ovenbird, which it is similar to in size and body shape, the Kentucky Warbler is a secretive ground-forager, more often heard than seen. It is an uncommon breeder in Ohio, Michigan and Pennsylvania, and is more common in the deep Carolinian forest to the south, in states like Kentucky and Tennessee. As a bird that lives in mature forests, the Kentucky Warbler is vulnerable to forest fragmentation as land is cleared for agricultural purposes. There are no Ontario breeding records for this bird to date, although a few who have overshot their breeding grounds are seen in southern Ontario every spring. 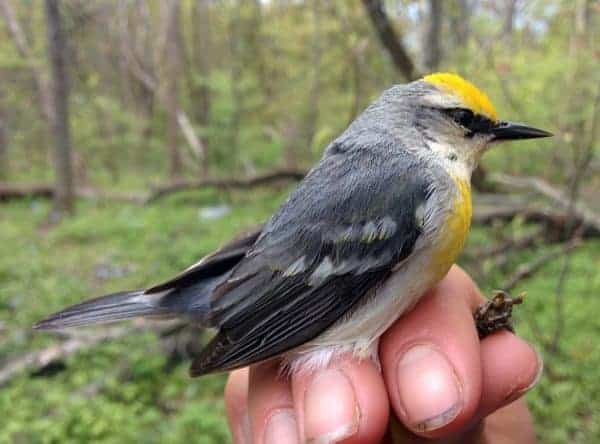 A Prairie Warbler was seen by Richard Pope on May 12th. This species is a migrant that is rarely seen in and around Point Pelee. Although its common name would seem to suggest that it prefers grassland habitats, it is actually named for the area where the ornithologist Alexander Wilson first found the species: near Bowling Green, Kentucky, in ‘prairie country’. The Prairie Warbler itself prefers shrubby habitats in which to build its nests, including Christmas tree stands. Southern Ontario represents the northern limit of its breeding range.

By far the most exciting bird sighting to come out of this Spring Song weekend was the Kirtland’s Warbler that was found by Peter Coo and Dawn Miles at Sheridan Point at the south end of the island. The only breeding population of Kirtland’s Warblers is in central Michigan. Singing males have been reported around the Bruce Peninsula and Petawawa, in areas of Jack Pines, but no nests have ever been found in Ontario.