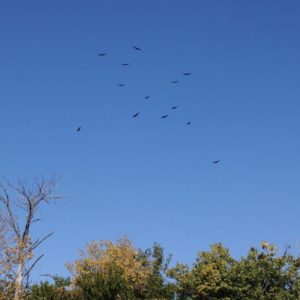 The overcast and rainy weather from the end of September continued into the first few days of October, accompanied by south and south-east winds. Scattered showers made it difficult for the nets to be opened for the whole 6-hour banding period and few birds were captured. Some birds were still moving through, though: large flocks of Blue Jays could be seen streaming overhead, along with mixed flocks of blackbird species and groups of American Robins. Sharp-Shinned Hawks were seen in abundance, soaring in search of food or else making sudden sorties to try and snatch a Blue Jay from the trees. 54 Sharp-Shinned Hawks were seen on October 3rd, which must have been a trying day for the songbirds in the area!

The numbers of birds seen and captured continued to decline as the south-east winds continued. Birds generally prefer to migrate when the wind is from the north and can provide them with a little bit of a push on their journey south, and when winds are southerly they may opt to stay at stop-over sites until the weather changes. The netting area was quiet for most of the second week in October, although nine Blue Jays captured in a single net run on October 6th provided more than enough excitement for a morning! Only a single bird (a Winter Wren) was captured on October 7th, but during census the tip was crowded with Double-Crested Cormorants, American White Pelicans, assorted gull species, nineteen Turkey Vultures, and two large female Peregrine Falcons, whose presence created an uproar among the flocks of Blue Jays and American Crows.

Bird activity picked up on the 8th of October as the temperature dropped noticeably. While the banding totals remained low, large flocks of Golden- and Ruby-Crowned Kinglets were seen moving through the trees, with some Brown Creepers mixed in with them. As the month progressed kinglets came to supplant thrushes as the most common species captured. Between the census and observations taken in the netting area 71 Golden-Crowned Kinglets were counted on October 9th and the number of Ruby-Crowned Kinglets was not far behind. Winter Wrens were also a common sight, and large groups of White-Throated Sparrows could be heard chipping to one another as they foraged among the leaf litter in the netting area. They formed an entourage for the first White-Crowned Sparrows of the season, which were seen on the 9th.

While most warblers have moved on to warmer climes by now, a few individuals still linger on. An Ovenbird and a Black-Throated Blue Warbler were banded on October 14th, and a Chestnut-Sided Warbler was banded on the 15th – almost three weeks after we had last captured one. Myrtle Warblers have been a common sight high up in the trees and along the roadside on the drive home, and one or two Nashville Warblers have been seen mingling with the kinglets.

While PIBO bands birds principally as a method of measuring population abundance, we are always interested to hear about birds banded on Pelee Island that have been encountered or recovered elsewhere. It was with great excitement, therefore, that we learned on October 13th that a hatch-year Veery banded by Sumiko Onishi on September 3rd had been recaptured in Costa Rica by Costa Rica Bird Observatories (in partnership with Klamath Bird Observatory). This 32g bird travelled approximately 3,400 km, including crossing the Gulf of Mexico! Veerys winter in central and southern Brazil, so this bird still has some distance to travel before it reaches its wintering grounds. This is the first time that a bird banded at PIBO has been encountered outside of North America. PIBO would like to thank Costa Rica Bird Observatories for sharing the news of this encounter with us.