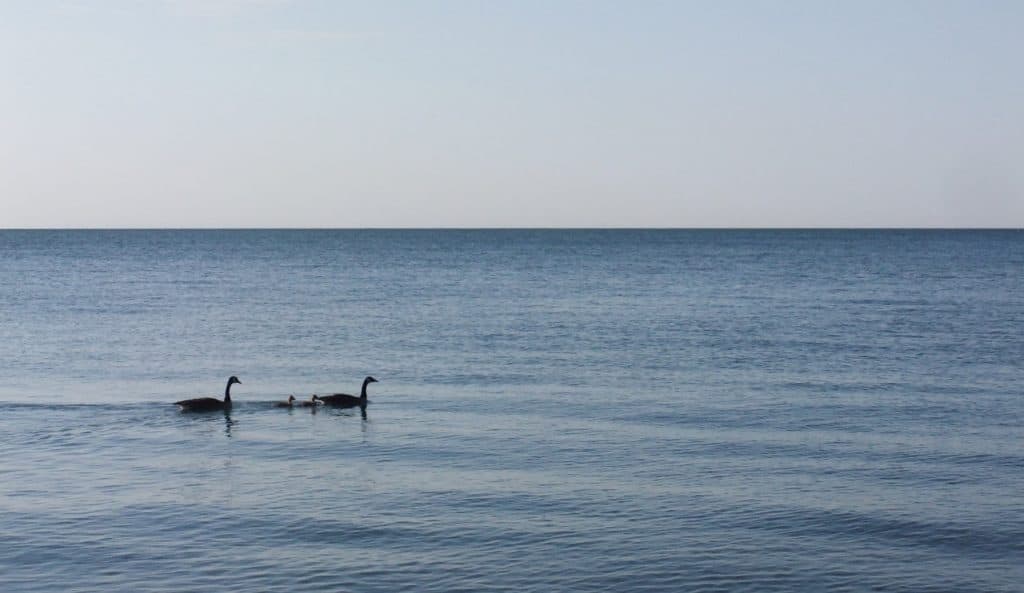 As the season has moved steadily forwards, it has brought more changes to the netting area at Fish Point. More leaves have come out on the trees, making it more difficult to spot warblers as they forage in the high branches. The flowers along the trail have changed from white trilliums and Dutchman’s Breeches to Appendaged Water-leaf, and Fox Pond has become filled with duckweed and the songs of Green Frogs and Bullfrogs.

The large flocks of Blue Jays, which had been seen frequently during the preceding week, were seen again on May 16th. They were an unusual sight – fall and not spring is usually the time of year when jays gather together in large groups – and they were only present for a few days more before their numbers dropped back down to the more usual ones and twos. On May 17th the most numerous species of bird was the Cedar Waxwing, with over a hundred seen on census and in the netting area, flying by in flocks of thirty to forty birds at a time. Again, this push of birds lasted for a few days and then tapered off down to more sporadic sightings.

Steady south winds from May 16th to 18th brought more warbler species into the area, including Bay-Breasted Warblers, Blackpoll Warblers, the first Mourning Warbler of the spring and the first Hooded Warbler banded this season, increasing our daily species totals. The weather changed abruptly on the 19th when the wind shifted to the north and the temperature plunged down to 11 degrees Celsius from 21 degrees Celsius the day before. The number of bird species remained high, though, possibly because the change in the wind direction discouraged them from migrating. 18 species of warbler were observed, but in small numbers. Many flycatcher species were around, including Eastern Kingbirds, Eastern Wood-Pewees and a Willow Flycatcher, identified by its distinctive call. On May 20th, the overcast skies and strong winds seemed to force the birds to stay down low in the trees, at a good height for us to catch them in our mist nets. 51 birds were banded of 24 species, the most numerous of which was the Swainson’s Thrush. American Redstarts were also common.

As part of PIBO’s other field work commitments, Sumiko has begun a concerted effort to listen for Species at Risk on Pelee Island, but although she has spent time watching and listening for Prothonotary Warblers at Fish Point and Yellow-breasted Chats in the Stone Road Alvar, none have put in an appearance yet. Unfortunately, this seems like it will be the second year in a row where Prothonotary Warblers have not nested on Pelee Island.

Shorebird species have appeared periodically on census, with Black-bellied Plovers and Spotted Sandpipers putting in an occasional appearance. The first Ruddy Turnstone of the season was seen on May 21st, and three Red Knots were out foraging at the end of the tip on May 26th, looking very small amid all the Herring Gulls. Outside of the standard migration monitoring efforts, PIBO’s summer volunteer Alice Pintaric went birding at Fish Point on May 17th and saw many shorebirds, including forty Black-bellied Plovers and ten Whimbrels, as well as Ruddy Turnstones, Dunlin and Short-billed Dowitchers.

The warm temperatures on May 23rd had the unpleasant side-effect of spurring the development of the many mosquitoes that typically inhabit Fish Point. They enjoyed feeding on PIBO staff while being fed on in turn by some of the birds in the area – two Common Grackles in particular were observed eating the insects out of some spider webs high up in a dead tree. The season’s first Connecticut Warbler was banded on the 23rd and was still singing in the area on May 24th.

Overcast skies and rainy weather rolled in on May 24th, curtailing PIBO’s mist-netting efforts. On census, though, a Least Bittern was heard calling in Fox Pond. It was absent on the 25th, which was also rainy, but was heard again on the 27th.

In the netting area, each morning’s bird banding grew quieter and quieter, until we reached a nadir of zero birds banded on May 30th! It was a good sign that it was time for us to close up the nets for the spring. Most of the season’s migrants have come and gone, and the birds that remain are busy raising their young. PIBO’s last day of banding was on May 31st. From here on in we will continue the daily census, and will focus on the Breeding Bird Censuses that PIBO has begun at two study plots on Nature Conservancy of Canada property at Brown’s Road, as well as the annual bird and amphibian Marsh Monitoring Surveys.

Correction: In our previous migration summary, we incorrectly stated that the Kirtland’s Warbler does not breed in Ontario. In fact, nests have been found in at least two sites in Ontario, including at Petawawa. Kirtland’s Warblers may also breed in small numbers in Quebec. Many thanks to Ted Cheskey from Nature Canada for pointing out our mistake!