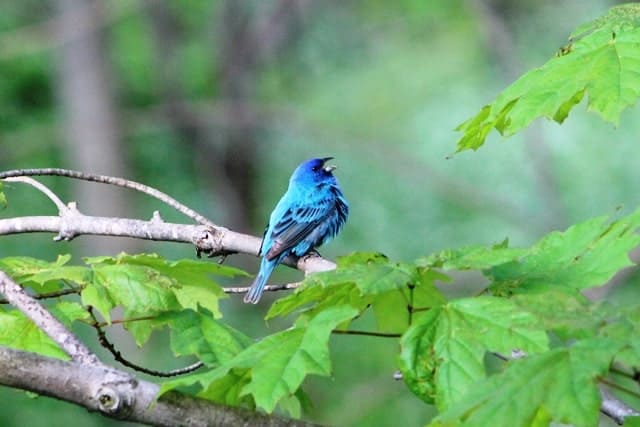 First of all, many thanks to the islanders who hosted, helped, and welcomed visitors during the Springsong weekend!

On May 11th I did my Great Canadian Birdathon to support Bird Studies Canada and PIBO.  This was my second Birdathon and I didn’t have much of a strategy, and felt quite a lot of pressure to find lots of species – my usual job is counting common species. I usually ask advice from those with lots of experience, but this year I made the decision about which day to start and where to check for birds. Of course, I had great support from my co-workers, who were taking care of the banding station.

We hadn’t seen many warblers and flycatchers up until May 10th, which made it hard to decide whether to do the birdathon before or after the weekend. On May 11th I recorded 57 species, including 14 warbler species and lots of flycatchers, on my census, and decided to keep recording for my birdathon. My co-workers at the banding station, however, were quite busy that morning, which made me hesitate to leave the area just in case they got busier. After all they banded 72 birds while I looked for more birds. There were lots of Ovenbirds hanging around – we banded 17 altogether. When I found a bird, it was often an Ovenbird, which didn’t help add new species! I didn’t see any raptors either, even a Red-tailed Hawk and kestrel I had seen the day before. Strong east winds limited bird activity to the west side, along with my ability to catch the bird songs and calls. Ring-necked Pheasant, Chipping Sparrow, and House Finch were some of the species I couldn’t find. I usually hear and see them from the car when I’m driving, but not that day. I still don’t know how I missed a Downy Woodpecker and Yellow-shafted Flicker! Maybe I was focusing too much on looking for more species to hear them? Anyway, for the next time I learned it’s better to have check list to confirm which species I haven’t seen. I didn’t see any rare birds, but whenever I started to give up a new species showed up. A Green Heron flew over me from behind, a Chimney Swift flew across above the canopy, and a big flock of Black-bellied Plovers showed up.

Finally, thank you so much to everyone who sponsored my birdathon. Your support encouraged me a lot! I will do my best next year too!!