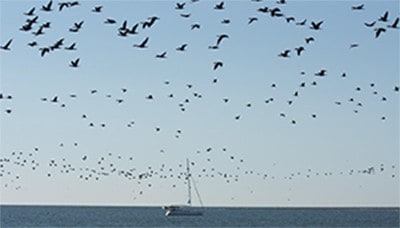 Guess how many cormorants? (Answer below)

Twelve days of mostly south winds and unseasonably warm temperatures in the second half of September made for a fairly quiet time at the Point. There were a few active days from the 20th – 22nd, and a very busy morning on the last day of the month, but otherwise, PIBO staff experienced one of the quietest stretches at the station for some time. This was reflected in the daily species counts and the catch-rate at the nets. On September 19th, for instance, a meagre twelve species were recorded on the 90-minute census (only five songbird species), and just eighteen species on the day, with two birds banded (0.13 birds/net-hour). It was probably the fewest number of species this ‘birder’ has detected on the census at Fish Point in thirteen years (about 1200 surveys). By comparison, when the wind finally came out of the north on the 31st, 44 species were recorded on census, 61 on the day, and 78 birds of twenty-two species were banded – 2.50 BNH, or more than 20 times the rate on the 19th.

Apart from the season’s first White-throated Sparrows (Sept. 17th), a Northern Parula the next day, and six Bald Eagles (19th), there wasn’t much to report during the first four days of the summary period. Conditions improved on the 20th when 57 species were tallied (compared to eighteen the day before) and 48 birds of seventeen species were banded (1.04 BNH). Five fall ‘firsts’ were noted – Yellow-bellied Sapsucker, Ruby-crowned Kinglet, Brown Creeper, American Pipit, and Scarlet Tanager – along with seventeen warbler species, including ten species banded. The 21st was quite active as well, with 44 species documented and another 39 birds captured of fourteen species, including two new arrivals – Winter Wren and Hermit Thrush.

There was a small movement of 17 Sharp-shinned Hawks that day, along with 11 Bald Eagles and a Peregrine Falcon chasing gulls at the Tip.
East winds settled in after September 22nd, activity tapered off again, and it remained fairly quiet for the rest of the week. The daily species count hovered around thirty from the 23rd to the 29th, and just 73 birds were banded over seven days. As always, there were some migrants around including small numbers of Sanderlings, three fall ‘firsts’ on the 24th – Green-winged Teal, Blue-headed Vireo, and Pine Warbler – some thrushes and warblers, a few remaining flycatchers, and increased numbers of kinglets, creepers and Winter Wrens. A couple of rainy days on the 28th and 29th reduced field coverage to just the census and some additional observations. The only notable sighting was an impressive ‘gulp’ of cormorants on the 29th – a conservative estimate of 12,000 birds.

While it’s an overused cliché, the ‘quiet before the storm’ applies well to birds and bird migration, as evidenced yet again on the last day of the month. After a week of low-key activity, the floodgates opened on September 30th and two staff were kept busy both on the census and in the netting area. In all, 61 species were recorded on the day – including ‘firsts’ for Eastern Bluebird and Eastern White-crowned Sparrow – and 78 birds of twenty-two species were captured (2.51 BNH). Large numbers of late-fall migrants were encountered, with season-high counts to-date recorded for White-throated Sparrow (152) and Yellow-rumped Warbler (81), along with a wonderful assortment of others. Twelve warbler species were noted and all the common thrushes in Southwestern Ontario were found – seven in all: Eastern Bluebird, American Robin, Wood Thrush, Veery, Swainson’s, Gray-cheeked, and Hermit Thrush.

Sixteen new arrivals were tallied at Fish Point during the summary period, which brings PIBO’s standardized ‘count’ for the season to 140. Twenty-five members of the warbler family have been documented since coverage began on August 1st, including 22 species banded. During this summary period a total of 284 birds of thirty-five species was captured in 471 net-hours (0.60 BNH). The season to-date banding totals are 1051 birds of fifty-three species captured in 1459 net-hours (0.72 BNH).

There are approximately 280 cormorants in the photo.