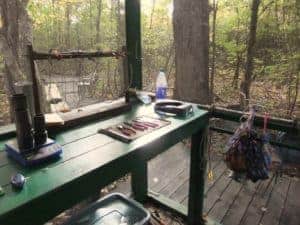 One last photo from PIBO’s old banding station, which is in the process of being rebuilt! For updates, see the Pelee Island Bird Observatory Facebook page. Photo by Sachi Schott.

As the fall season drew to a close, field operations began to wind down at PIBO. Bird banding at Fish Point continued until November 4th, with a few Golden-crowned Kinglets, Hermit Thrushes and Winter Wrens captured. The census continued until November 15th and racked up large numbers of migrating blackbirds and waterfowl. The continued mild temperatures were reflected in the unseasonable activity of reptiles and amphibians around Fish Point and Stone Road: a large green frog and a salamander (possibly a smallmouth salamander) were found on the road, and a large fox snake was seen near the PIBO cottage, possibly looking for one last meal before heading into its hibernaculum for the winter.

The skies were dominated by flocks of hundreds of American Crows and thousands of Red-winged Blackbirds and European Starlings that rose up from the trees to test the prevailing winds by venturing out over the lake. At times they were harassed by a Red-tailed Hawk or Peregrine Falcon who wanted to test its luck. Over 350 American Crows were seen heading out from the tip towards Middle Island on November 3rd. Some Rusty Blackbirds could occasionally be distinguished in among the other blackbirds. This species has suffered precipitous declines in recent years, and the numbers of them seen this fall are a far cry from what PIBO has recorded in previous years.

Some other songbirds were also seen on migration. Eight Winter Wrens were seen on census on November 2nd, all of them alarm calling from the side of the path as they kept a wary eye on passing pedestrians. The following day saw a total of eighty Golden-crowned Kinglets on and around Fish Point, and fifty-five were counted on the 6th. Their numbers declined from there, until only four were seen on November 13th and 15th. One Tree Swallow was seen flying over Fox Pond on November 9th, scooping up the last midges and mosquitoes of the year.

Out on the lake, groups of Red-breasted Mergansers, Buffleheads and Scaup species rested and fed, unperturbed by the high winds and whitecaps that buffeted the west beach. Horned Grebes were seen most days as well. They are less gregarious than the ducks, and were usually seen singly or in loose groups. A couple of Sanderlings, a group of Killdeer and a Ruddy Turnstone were seen on the tip on the 5th, proof that some shorebirds were migrating as well.

Eleven Northern Saw-Whet Owls were banded on November 4th, but none during the last public owling night on the 5th. The owling nets were opened on several subsequent nights, when the weather permitted. The Eastern Screech Owl that was banded on PIBO’s first public owling night this fall was recaptured once more, and several more Northern Saw-Whet Owls were captured, including two birds caught wearing bands with unfamiliar numbers that were banded by other banding stations. We won’t know where they came from until all the banding stations finish submitting their data to the Bird Banding Office for the year, but we look forward to finding out!

As part of closing down the field station for the year, PIBO staff cleaned out the nest boxes at Fish Point. The boxes were installed for the use of Prothonotary Warblers, but none bred on the island this year. Instead a few of the boxes were used by Tree Swallows and House Wrens. The Purple Martin boxes at the PIBO cottage on Stone Road were also taken down and cleaned. Bird nests are never a pretty sight after they’ve been home to young birds over the summer: a thick layer of feces, insects, and bird dandruff (from growing feathers) accumulates inside the nest over the three to four weeks before the nestling birds fledge. Very few bird species ever reuse nests, and in the case of House Wrens they invariably fill the nest box so full of thick sticks and spider egg sacs that other bird species cannot use it. For that reason, and to prevent the spread of parasites, it is important to remember to clean out nest boxes and Purple Martin houses after the young have fledged. It is often a distasteful task, but think of how pleased your bird friends will be to return to a clean house next spring!

PIBO’s migration monitoring programs will resume in April, 2017. PIBO’s staff thank you for your support and interest in 2016, and hope to see you then!