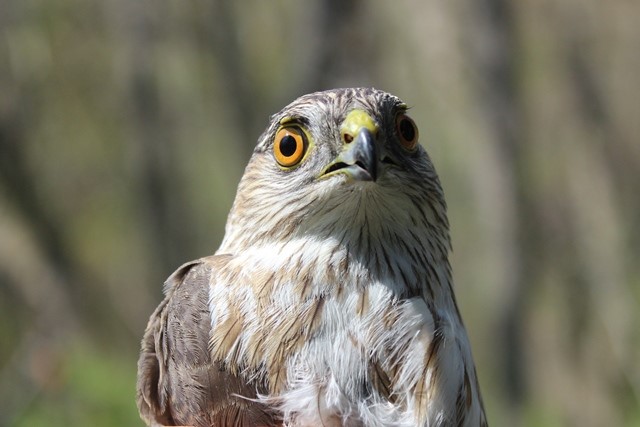 This has been a strangely quiet start to May. Ten days in and we have yet to see any large-scale movements of migrants. As with the last summary period, winds remained predominantly out of the north and east, working against any birds heading for Canada. Excepting May 1st, we still recorded at least one new species for the season every day, but for more than half those species, that initial record remains one of only a handful to date. That is to say these new arrivals are not showing up in appreciable numbers.

Many of the more familiar migrants have shown up like Rose-breasted Grosbeak (May 3rd), Indigo Bunting (May 7th), and Scarlet Tanager (May 9th). The new Parulidae species we’ve officially logged are Blue-winged Warbler, Ovenbird, Hooded Warbler, Chestnut-sided Warbler, and Northern Parula. Once again though, all these species are only being seen sporadically.

The most interesting new sighting was a group of four American White Pelicans that were seen at the tip of Fish Point during the census on May 2nd. Small groups of pelicans, possibly the same ones, have since been seen over the centre part of the island, and on a sand bar just off Middle Island. This marks the third consecutive year that pelicans have been seen on Pelee Island. These birds seem to be passage migrants, or possibly young birds that have not yet reached the first breeding age of three years. Seeing the world before settling down I suppose

Activity at the nets has been very sparse. Ignoring the two days that got rained out, we’ve been averaging ten birds banded per day. One capture worth mentioning was a Sharp-shinned Hawk. This was the first ever spring capture for this species. Sharpies are most often seen on the island during the fall migration. The bird we caught was a second year male so inexperience may have played a role in his unseasonal appearance. Overall species diversity between the census and net areas hasn’t changed since the last summary period, mostly in the range of 45 to 55 species in a day.

The Heritage Centre’s annual Spring Song events were held on May 6th and 7th, including the bird race. Even this event’s influx of seasoned birders failed to produce a more substantial list of birds. The cumulative species list, from ten racing teams, came in at 128. This is a small figure as the winning team alone usually has that many species or more. Still, there were some notable sightings. An OFO tour group had a colony of American Avocets (apparently this is the collective noun for them) land briefly at Fish Point, and others had possible Neotropic Cormorant and Western Tanager. The highest concentration of birds was seen Saturday afternoon at Lighthouse Point, but these all cleared out overnight, despite the unfavourable winds.