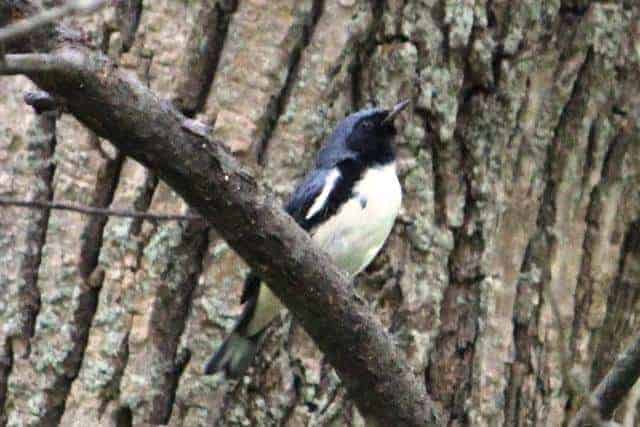 September started off with a high diversity of warbler species and a busy few days of banding as northeastern winds helped to push migrants south – 120 birds were banded on September 1st, and 92 on September 2nd. The majority of the birds captured were Swainson’s Thrushes, Veerys, Magnolia Warblers and American Redstarts. One highlight was a beautiful male Golden-Winged Warbler that was banded on the 1st. Although the wind direction was very favourable for migration, some migrants did linger on the island for a few days before moving on. Recaptures, even of birds banded on the same day, are very rare at PIBO, but from September 2nd to September 6th we recaptured on bird every day. Most were recaptured the day after they had been banded, having stayed on the island overnight to feed and fatten up before continuing their flight south.

From there the number of birds banded declined as the winds shifted to the south, although a few groups of warblers did linger on. Banding remained slow until September 9th, when north winds beginning early in the morning brought large numbers of thrushes into the netting area. They could be heard swooping in to land in the dogwood trees even before the sun had risen, and by the end of the morning 100 birds had been banded, most of them Swainson’s Thrushes (61). 16 warbler species were observed around the netting area and on census, but most stayed too high to be caught in the nets. September 10th brought rain and a sharp drop in temperature, and from then on bird activity became more consistent, with banding totals in the thirties and forties. Many species were observed (63 on September 12th) but in smaller numbers. Mixed flocks of Blackpoll Warblers, Black-Throated Green Warblers, Wilson’s Warblers and others occasionally passed through the netting area and were often seen on census around Fox Pond. A pod of over fifty American White Pelicans were spotted sharing the beach at the tip of Fish Point with the gulls and Double-Crested Cormorants on September 12th, 13th and 14th, and a group of three Red-Headed Woodpeckers entertained us in the netting area on the 13th. On
the 14th, many birds were sighted early in the morning and the first White-Throated Sparrow of the season was captured, but activity tapered off towards noon as the winds grew stronger.

Along with the songbirds, raptor migration has begun as well. A Red-Tailed Hawk flew by on September 2nd, and the first Northern Harrier was seen on census on the 3rd. Three Sharp-Shinned Hawks showed up on September 5th and remained in the area for several days, chasing each other and perching on a dead tree above the netting area. From September 12th onwards we banded one Sharp-Shinned Hawk a day, indicating that new, unbanded hawks were continually passing over the island. September 4th was a day for falcons, bringing us the first Merlin of the season and an American Kestrel was observed watching the songbirds who were bathing at the edge of Fox Pond. On September 14th, a Merlin perched on a dead tree over the netting area to eat its breakfast – a very unlucky songbird! Although most raptors prefer to migrate around the Great Lakes instead of crossing them, we will be seeing more of them as the season progresses, especially on clear, sunny days which provide good thermals for them to soar on.

Firsts for the season: