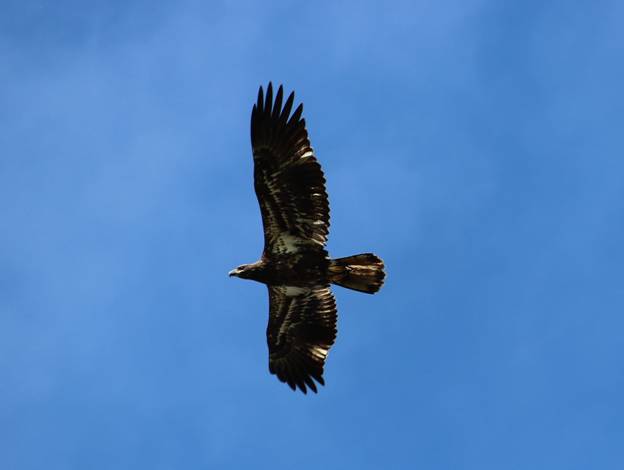 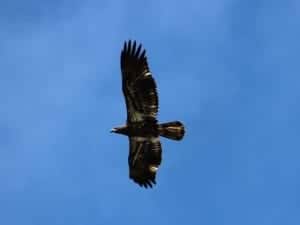 There was some migration activity during the summary period but numbers were generally low and species diversity was down for mid-September. Daily species’ counts at the station often reach 60-75 in September, compared to a high this year of 52 from the 11th – 20th, on September 17th. Seven fall ‘firsts’ were recorded during the update period. A nice variety of birds were banded, yet the station’s capture totals this fall remain below 50% of the ten-year average. In all, 201 birds were netted over ten days in 330 net-hours, for an average catch-rate of 0.61birds/net-hour.

A quiet morning on September 11th was followed with some activity on the 12th including ones-and-twos of Sharp-sinned Hawk, Merlin, Osprey, and eight Bald Eagles at the tip. Ten warbler species were noted, with 32 Blackpolls counted and smaller numbers of Tennessee, Magnolia, Cape May, Wilson’s, and American Redstart. The first White-throats and Swamp Sparrows of the fall appeared on the 13th, as well as 4 thrush and 7 warbler species.

September 14th was active for thrushes – 18 Swainson’s and 10 Gray-cheeks were banded – along with small numbers of warblers including Blackpoll, Black-throated Blue, Ovenbird, and Northern Waterthrush. Southwest winds on the 15th and 16th made for low-key time, although a few Yellow-bellied Flycatchers were banded and a Sharp-shinned Hawk. The 17th was the most active morning of the summary period, with 51 species tallied on the day, including 15 warbler species. A Northern Parula and Connecticut Warbler were both new for the fall. Another 13 warbler species were observed on September 18th along with 2500 Ring-billed Gulls and 7 Sanderlings.

Activity on the final two days of the update period was limited to just 32 and 28 species, respectfully, and 26 captured birds. Even the ‘trusty’ thrushes were reduced to 4 Swainson’s and 1 Gray-cheeked on the 20th.

PIBO’s next migration update will be posted on October 2nd.