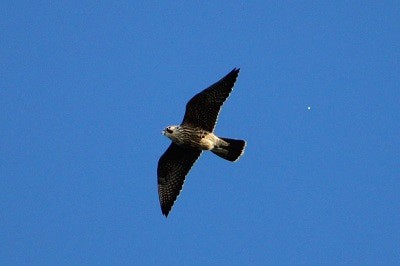 A steady decline in the amount of bird activity in the netting area at Fish Point in the last two weeks of October was accompanied by a big increase of diurnal migration activity overhead. The totals will continue to build in November, but the last ten days of October was a good precursor, with tens-of-thousands of songbirds streaming south over the point during the day – often at high altitude – heading towards Middle and Kelley’s islands. In all, more than twenty thousand blackbirds – mostly red-wings and grackles – were noted on the daily 90 minute census over sixteen days, as well as good numbers of robins, larks, pipits, goldfinches, siskins, and others. Activity picked up on the lake as well – hundreds of red-breasted mergansers and increased numbers of buffleheads were observed towards the end of the month.

An active morning on October 16th was followed by a busy day on the 17th when 45 species were recorded including fall ‘firsts’ for northern saw-whet owl and American tree sparrow, along with 9 blue-headed vireos, 69 golden-crowned kinglets, 34 ruby-crowns, and 16 hermit thrushes. The first purple finches of the fall were seen on the 18th along with 50 robins, 27 white-throated sparrows, and a banded orange-crowned warbler. Lots of cormorants were still around on October 19th, with 950 tallied, along with 60 turkey vultures and 131 American crows wafting south off the tip on the census.

Strong southwest winds on the 20th dampened migration activity and there wasn’t much to report over the next couple of days apart from another 194 robins on the 21st and a close look at an immature golden eagle at Fox Pond on the 22nd. Migration picked up again on October 23rd when 49 species were recorded including 5246 blackbirds, 662 crows, 44 turkey vultures, 90 golden-crowned kinglets, and 50 dark-eyed juncos. Twelve hermit thrushes were banded. Steady rain on the 24th made for a low-key day and reduced field coverage to the 90-minute census and some additional observations in the netting area. The highlight of the morning was a Snow Bunting on the west beach – a first for 2015. October 25th was quiet in the netting area but there were still thousands of blackbirds and dozens of crows heading south, along with a late common yellowthroat, and an even later scarlet tanager in the netting area.

Though far below the season-high daily count of twelve thousand earlier in October, perhaps the last large group of cormorants was tallied on the 26th – 2300 individuals – along with a few lingering sharp-shinned hawks, killdeers, and sanderlings. The wind started to build from the east on the 27th and reached gale conditions by the 28th. Just 18 species were recorded on the daily census that day during steady downpours, followed by 20 species on the 29th under equally harsh conditions. Numbers rebounded somewhat on the last two days of the summary period when 40 species were documented on the 30th, including the first buffleheads of the fall, a greater yellowlegs, 362 red-breasted mergansers, and another 800 American crows, followed by small numbers of five raptor species, 68 golden-crowned kinglets, and 185 robins on October 31st.

PIBO’s final migration summary of the fall will be posted on November 18th.