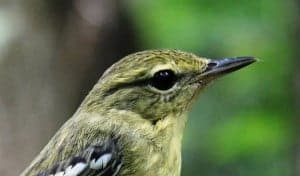 Hot, humid conditions and southwest winds made for a relatively quiet ten days at the Point, although migrant numbers picked up towards the end of the month. Just seventy birds were banded from the 21st – 31st (compared to 240 last year), but the netting area was actually quite active compared to the rest of Point. In all, 19 fall ‘firsts’ were noted in PIBO’s official ‘count’ area during the summary period. Daily species diversity ranged from a high of 57 on the 29th to a low of 12, thanks to some intense rain and lighting storms, on the 27th.

South winds and rain produced little of note on August 21st and 22nd, but some north winds on the evening of the 22nd made for an active morning the next day. Fifty-two species were recorded including season ‘firsts’ for Veery, Nashville and Magnolia Warbler. Ten warbler species were tallied on the day including 7 Ovenbirds (5 banded), 6 American Redstarts, and ones-and-twos of Blackburnian, Black-and-white, Canada, and Northern Waterthrush.

Similar conditions on the 24th saw fifty species recorded including seven warbler species and the first Swainson’s Thrushes and Black-throated Blue Warbler of the fall. Hundreds of Common Terns were noted at the tip the next day along with an estimated 1100 cormorants. Activity began to taper off after the 25th and just 40 species were recorded on the 26th, including the first Merlin of the fall. Heavy rain and intense thunderstorms on the 27th put a complete damper on the field coverage, and high temperatures, west winds, and more rain on the 28th made for an uneventful morning, with just 27 species tallied.

The wind shifted to the north on the evening of the 28th and PIBO staff were greeted with a nice variety of migrants the next morning. In all, 57 species were noted during the official ‘count’ period. Sightings on the 29th included Osprey, Black-bellied Plover, Eastern Screech-Owl, 5 flycatcher spp. and 14 warbler spp. Yellow-rumped, Bay-breasted, Blackpoll, and Wilson’s Warbler were new for the fall.

The final two days of the summary period remained somewhat active, though still a far cry from the usual activity for this time of year. In 2006, for instance, 187 birds were banded on August 30th and 125 on the 31st in 37 net-hours (8.4 birds/net-hour), compared to 12 captured birds this year over the same two days in 64 net-hours (0.19 birds/net-hour). While this is just one example, it’s safe to say that August 2013 has proven to be the quietest on record at the station.

PIBO’s next migration update will be posted on September 13th.