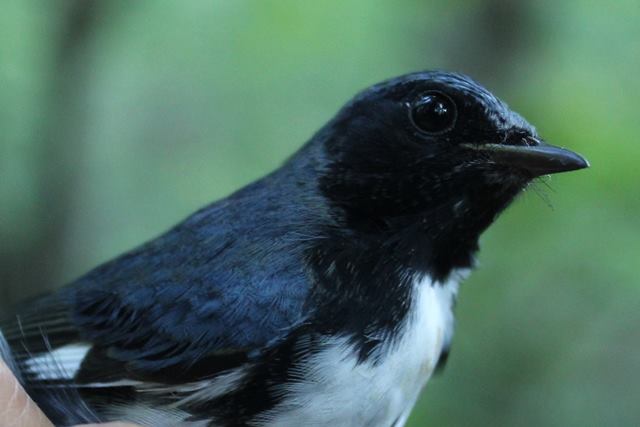 After enjoying a spectacular start to the month of September, bird migration all but ground to a halt for the following two weeks. From September 16th to 30th, PIBO’s daily banding total never rose above 25 birds, and the large, mixed flocks of warblers that had made up the bulk of our banding totals previously were no longer to be seen.

One reason for this decline in the number of birds captured was the sustained south winds, which created difficult conditions for bird migration. Another reason was the large number of hawks around, especially Sharp-shinned Hawks. For several mornings in late September four or five of them were in the habit of hanging out in the trees above the netting area, ready to snatch unwary migrants. Many Accipiter species (Sharp-shinned and Cooper’s Hawks) were seen migrating on September 22nd, when they had a light south-east wind to help them on their way south. The following day was also a good one for hawk migration, with Sharp-shinned Hawks, Northern Harriers, Bald Eagles, an Osprey and a Peregrine Falcon being seen on census. The first Red-tailed Hawk of the season was seen flying over the netting area on September 20th.

Much of the bird diversity observed on a daily basis was lost when the warblers stopped moving through the island. While Black-throated Blue Warblers continued to be observed and captured almost every day, many more species were seen only infrequently or not at all. Instead, sparrow species became more common. White-throated Sparrows and Eastern White-crowned Sparrows were seen for the first time this fall on September 28th, as were Slate-coloured Juncos. Woodpecker species were also seen frequently: the trees above the banding station resounded with the cries of Yellow-shafted Flickers and Red-bellied Woodpeckers, and the drumming of Downy Woodpeckers and Yellow-bellied Sapsuckers. The majority of the birds that were captured and banded continued to be Catharus thrushes, mostly Swainson’s Thrushes. The first Hermit Thrush was captured on September 26th.

Two fledgling birds were observed on census during this time period, the first being an unidentified sparrow (possibly a Song Sparrow) that was seen being fed by a parent. The second was a young Northern Cardinal that was being fed by the adult male. Both of these are unusually late dates for fledglings to be seen: even for resident birds that do not have to prepare for migration, this year’s young should be fending for themselves by now. Either the adult birds began nesting very late in the year, or they were able to squeeze in a third brood thanks to the atypical weather Pelee Island has been experiencing.

One very bright spot this year has been the number of monarch butterflies observed during the daily census. 84 monarchs were counted on September 19th, migrating off Fish Point in spite of the rainy weather and east winds, and smaller groups of between ten and twenty butterflies were seen on many other days. So far this season PIBO has counted 205 monarch butterflies. This more than doubles the total number of monarchs seen during the entire fall season in 2016, when only 101 monarch butterflies were observed. Considering the monarch butterfly’s status as an endangered species, this increase in numbers is a very encouraging sign! Hopefully these population gains will be sustained and continue to grow, buoyed in part by the conservation efforts being made by property owners who have planted milkweed and taken other steps to make their gardens and yards butterfly-friendly.

The PIBO banding station is open seven days a week (weather permitting) from approximately 7 a.m. to 12 p.m. Visitors are always welcome, and the trail in to the station is quite dry, so rubber boots are no longer necessary!