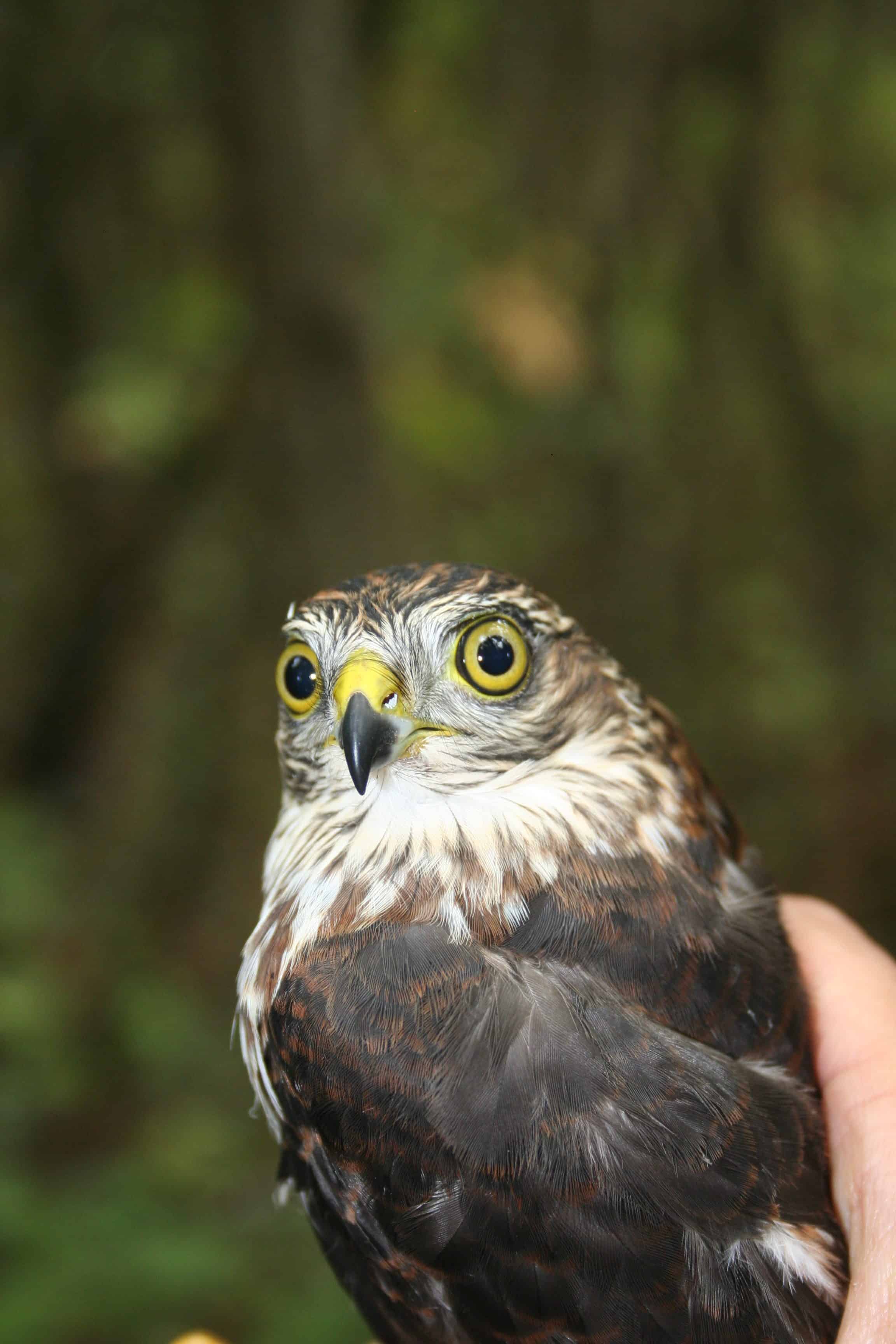 September 16th brought the promise of an exciting fall migration with the arrival of 28 Sharp-shinned Hawks and more than 100 Monarch Butterflies fluttering around the tip of Fish Point, getting ready for their southern journey to the mountains of Mexico.

Then the winds changed to the south and it was very quiet at the banding station from September 17th to 24th.  Some days we caught only 2 or 4 birds in the 6 hours that our 10 nets were open.

Most mornings we could hear Great Horned Owls and Screech Owls on our predawn trek through the woods into the banding station.

We are no longer seeing the huge numbers of Double-crested Cormorants (10,250 counted on September 9th) or White Pelicans (53 on September 13th).

The most frequently banded bird continues to be the Swainson’s Thrush with 43 banded in the second half of the month.

On September 24th a change of wind direction brought some Yellow-rumped Warblers.  They don’t travel as far south to overwinter as some warblers, so they linger on their breeding grounds later than the long-distant migrants.  White-throated Sparrows have started to show up with 34 banded in the last few days.   Killdeers have replaced Sanderlings at the tip of Fish Point.

On September 27th there was an invasion of Winter Wrens moving across the fallen logs on the forest floor, reminding me of mice.  68 were counted on census.

Yellow-shafted Flickers arrived on the night of September 28th and we observed 30 in 2 adjacent trees the next morning.  Sharp-shinned Hawks spent the morning noisily chasing them around the Fox Pond area.

Other firsts in the last few days of September include Hermit Thrush, Ruby-crowned Kinglet, and American Pipits wagging their tails, on the west beach.

The lack of birds gave us a chance to observe other wildlife.  3 Garter Snakes – 1 striped and 2 melanistic (black), were seen twined together in the tree branches at eye level on September 20th.  Some snakes that are not normally climbers go into the branches in the spring and fall to get more heat from the sun.

The next day we saw both a neonate Northern Brown (Dekay’s) Snake that was no more than 6 inches long as well as a nearly 5 ½  foot long Fox Snake minutes later.

There are beautiful purple flowers in the mature Carolinian woodland at Fish Point in the fall.  These include Great Lobelias, Short’s Asters with their heart-shaped leaves, and Common Day

Flowers.  The southern Pokeweed berries, Wild Grapes, and Fox Grapes are food for the migrating thrushes.

One of the most beautiful of all butterflies – the Buckeye with its distinctive yellow-rimmed black eyespots, and iridescent blue and purple ‘irises’ was in the Fish Point woods on September 26th.  Other interesting insects include the distinctive Black Saddlebags Dragonflies which are found among our large, migrating Common Green Darners.

There are still lots of birds ready to migrate through Fish Point! Come and see us – we are at the banding station from dawn to 1 p.m. daily unless it is raining.  Currently, the conditions are dry for walking in but if it rains you will need some hiking or rubber boots.