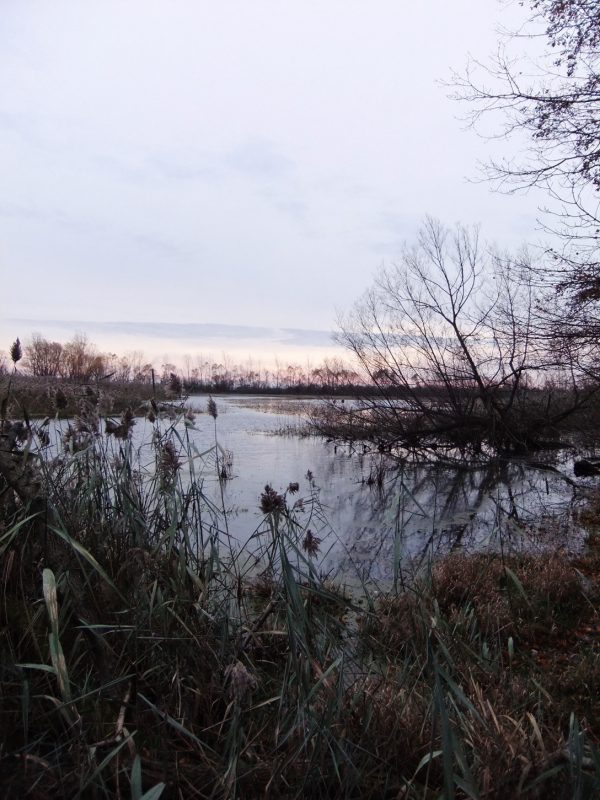 As always, November has been the month for waterfowl. The tip of Fish Point is now denuded of Double-crested Cormorants and American White Pelicans, and instead has been hosting Canada Geese, along with a small number of gulls. The first Common Goldeneye of the season was seen on census November 9th, and the first Scaup (whether Lesser or Greater was impossible to say) appeared the next day. These duck species, together with Buffleheads, made up the bulk of the birds seen on the census from then on, often forming large rafts far out on the lake. Thousands of them were seen along the south shore on November 12th, and four Black Scoters were spotted on the water in front of the PIBO cottage.

Fox Pond, too, has been hosting its share of migrating waterfowl: the water level has been unusually high this fall, and as the water has not yet frozen over it has been a hospitable retreat for Mallards, Wood Ducks, and Ring-necked Ducks. A flock of Hooded Mergansers even sheltered in it on November 9th. Large flocks of Red-breasted Mergansers were seen on the census in the early days of November, but only one was seen on November 15th.

The first few days of November were still busy with migrating songbirds who had not yet left Pelee Island. Large flocks of American Robins, Eastern Bluebirds and American Goldfinches were seen continually passing over the banding station, along with large flocks of mixed blackbird species: Red-winged Blackbirds, Common Grackles, European Starlings, and even some endangered Rusty Blackbirds, which were especially numerous on November 8th. Groups of Yellow-shafted Flickers were common as well and made for a striking sight whenever they flew, showing off their flashing yellow primary feathers and bright white rumps. Sharp-shinned Hawks were seen frequently on November 1st and 2nd, and on the 3rd ten of them were seen altogether, along with six Red-tailed Hawks and a Northern Goshawk, the largest of the Accipiter species. Turkey Vultures were also seen on November 2nd, surfing along the high winds on the west beach, but cleared out soon afterwards.

PIBO’s bird banding operations at Fish Point continued for ten days in November, and though the busiest days of the season were behind us we still banded 79 birds on November 4th, most of them Golden-crowned Kinglets, with some American Tree Sparrows and Slate-coloured Juncos thrown in for variety. The number of Ruby-crowned Kinglets seen and heard dwindled continually, but Golden-crowned Kinglets were present right up until the last day of banding. It is very rare to capture any warblers at all in November, so we were very surprised to find an Orange-crowned Warbler in the nets on November 7th! The last birds captured, on November 9th, was a Slate-coloured Junco that had been banded on November 1st and a Northern Cardinal. Nets were opened briefly on November 10th and collected a goodly number of leaves but no birds before being closed and taken down for good.

The last monarch butterflies of the year were sighted on census November 3rd. This corresponds almost exactly with the last date on which monarchs were seen in 2016 (November 4th), so while monarch butterflies have been unusually abundant this year their migration through Pelee Island does not seem to have been delayed at all.

As part of our end-of-season operations, PIBO staff cleaned out the nest boxes that have been set up at Fish Point to attract Prothonotary Warblers. Only one male Prothonotary Warbler was seen this spring, and that only briefly, so it was assumed that no nesting activity had taken place. We were therefore surprised to find one pristine Prothonotary Warbler nest, lavishly padded with moss and maple keys. It was evident from its extreme cleanliness that it had never been used, and that the male had not succeeded in attracting a mate. Nevertheless, it was encouraging to see that at least one of the nest boxes had been used by our target species. A few of the other nest boxes contained House Wren nests but most were empty.

With the last census on November 15th, PIBO has concluded its fifteenth year of migration monitoring on Pelee Island. We would like to thank all of you for your continued support: whether by donating your time or money, ‘Liking’ our posts on Facebook, or simply reading and enjoying these migration summaries, you help to make our work worthwhile! PIBO’s operations at Fish Point will resume on April 1st, 2018. If you would like to get your birding fix before then, PIBO will be hosting the annual Audubon Christmas Bird Count on December 17th: for information on how you can participate, please contact .

Thank you again, and happy birding!