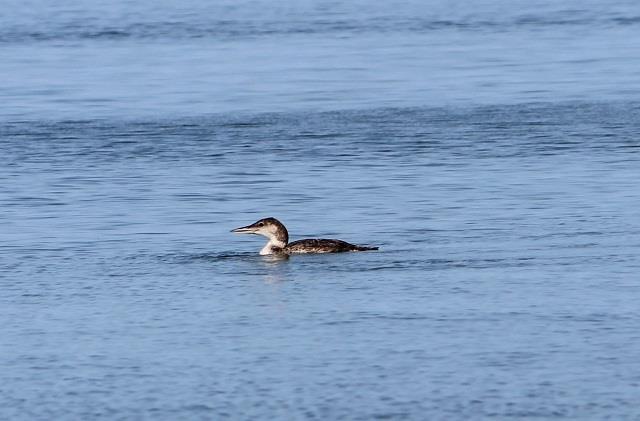 After enjoying July off, the Pelee Island Bird Observatory has returned to the routine of migration monitoring for the fall.

The census began on August 1st, a calm, quiet day, marked with sightings of local breeding birds such as Indigo Buntings and Yellow Warblers. Families of Mallards and Wood Ducks still inhabit Fox Pond, though now the young have grown as big as their parents! The American White Pelicans have been a fixture around Fish Point, with as many as fifty nine being seen in a single morning. They have been seen every day, either hanging out at the tip of the point, or on the sandbar out in the lake, or else fishing in Mosquito Bay. On the west beach, a few Spotted Sandpipers, Least Sandpipers and Killdeer are all that have been seen on the shorebird front.

In spite of the population boom created by so many young birds, now grown up and fending for themselves, Fish Point has a much quieter atmosphere than it did on the last day of the spring census back in June. Then, the riotous flocks of Red-winged Blackbirds had been a constant all along the trail: now, the air is still and quiet, except for the hum of insects, broken occasionally by a Carolina Wren or a Red-eyed Vireo. Soon, though, the blackbirds will be flocking together as they prepare to make their sorties across the lake: already some small flocks have been seen, along with groups of Chimney Swifts and Purple Martins, testing the air as they wait for a good wind to give them their first strong push on migration.

The mist nets were opened for the first time this season on August 17th, and captured the first bird of the fall – a Red-eyed Vireo! It was a hatch-year bird, and as one had been heard singing in the area earlier in the day this may have been a local bird, born and bred on the island, and preparing for a long flight to Mexico and South America. The rest of the morning was exceedingly quiet, with the ambient hum of katydids and cicadas remaining uninterrupted by any birdsong. The future likely holds at least a few more quiet mornings before the fall migration begins in earnest. From here on in, though the banding station will be open for six hours every morning (weather permitting!), beginning half an hour before sunrise.

If you are interested in visiting the banding station this fall, or have plans to send visitors our way, we would like to remind you that, for the sake of the birds, there is no bird banding on rainy days. If migration is slow and we aren’t capturing birds, or if the weather forecast is unfavourable, we may open the nets later or close them earlier, at the discretion of the field staff. As a rule of thumb, if the PIBO van is parked across the road from the entrance to the trail, then the station is open and we are banding birds. And, although we have done our best to clear the path in to the banding station, poison ivy continues to flourish all along the trail! Close-toed shoes and long pants are highly recommended.

Hopefully all of the above has not discouraged anyone from making the trip out to Fish Point! We at PIBO are always happy to receive visitors and to share our knowledge of birds and bird banding, and we hope to see you later this year.