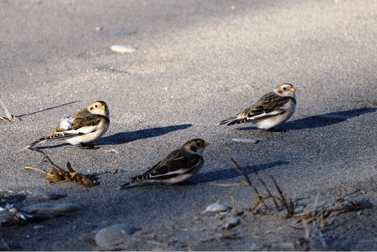 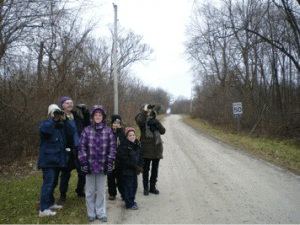 The Annual Bird Count was held on December 14, 2014. John Pogacnik is the compiler for the Lake Erie Islands Count Circle which includes the Bass Islands, Kelleys, and Pelee Island.

It was the year of the owls! Five species of owls were recorded on the islands that day – great-horned, eastern screech (second highest count ever), a snowy owl on North Bass and Pelee, a northern saw-whet and a long-eared owl on Kelleys! Earlier in the season, we had experienced a cold snap that brought lots of waterfowl and tundra swans-followed by the thawing of mainland marshes with warmer weather-waterfowl numbers fell and the tundra swans disappeared. With the warm weather, waterfowl and gull numbers were way down this year. The only exception was the record number of 70 horned grebes. It was a relatively quiet day in the woods on South Bass as well with occasional pockets of bird activity. Yet at the end of the day, eighty species of birds were recorded on the Lake Erie Islands! The highest numbers ever for the Lake Erie Islands Count Circle were also recorded for yellow bellied sapsucker, downy woodpecker, and black-capped chickadee with second highest ever numbers of red-bellied woodpeckers, northern flicker, white breasted nuthatch. Could it be all those dead ash trees? Compiler John Pogacnik mentioned that these species sometimes show a small migration every other year that coincides with winter finch migration. The Bass Islands did have pine siskins earlier this season and Kelleys Island and Pelee had some on count day.
On South Bass, we saw 49 different species with four additional being seen during the count week. The highlight was a belted kingfisher viewed by Elizabeth Heineman and Julene Market at Fishery Bay and a large flock of cedar waxwings feeding on berries near the Cargo Net found by Susan Harrington. The best feeder bird was a tufted titmouse at Kit Knaser’s feeder for the second year in a row-this is only the ninth year this species has been recorded for our Count Circle. Jean Hilt had two red-winged blackbirds at her feeder-only ones recorded for South Bass that day. Noticeably absent this year were sparrows, wrens, and yellow-rumped warblers. On South Bass, other counters that also surveyed the shorelines and woods by car and foot were Lisa Brohl, Karen Wilhelm, Bridget Wise, John Dodge, Paula Zeibarth, and Gabriella Kaplan. Thanks to Mary Ann McCann, Jean Hilt, Ruth Scarpelli, Paul Ladd, Kit Knaser, Bridget Wise, Sue Amrine, Anita McCann, Gene and Pam Zajac, Russ Brohl, Sarah Toole, and John Ladd for watching their feeders for us! We appreciate landowners cooperation with access that day!
At Kelleys, John Pogacnik, Tom Bartlett, Vic Fazio, Sue Carty, Sandy Tkach and Mary Warren surveyed the island with Lee Tkach, Bruce and Leslie Korenko, and Phil Corathers watching their feeders. Although there were duck hunters in close, they still recorded an amazing 42,582 red-breasted mergansers! Highlights included count week harlequin duck, turkey vulture, and peregrine falcon. One Iceland gull, four American pipits, and a gray catbird were all great finds on Count Day.
We were able to visit Green Island on Saturday, December 13, 2014 with a permit from the Ohio Division of Wildlife (Lisa Brohl, Paula Zeibarth, Julene Market, and Paul Ladd.) The highlight of that trip were two great-horned owls and a coyote!
Nancy Welter counted birds at her feeder and walked and drove around Middle Bass Island for us this year. Joe Dopps was able to view a snowy owl on North Bass Island on Wires Road on Count Day. 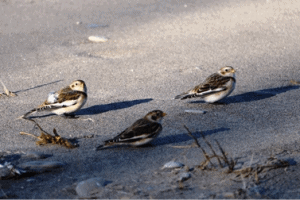